Some non-advertising content. This book features my photographs of a prominent Brooklyn industrial landmark that has recently been demolished. I wrote an essay on ruins in art history and in contemporary popular culture. I also collaborated with an architectural historian to research and write an essay on the history of the refinery, including its influences deep into New York and beyond American shores.

The book was published by Schiffer Publishing in the fall, 2017, accompanied by a solo exhibition at the Front Room Gallery in NYC. 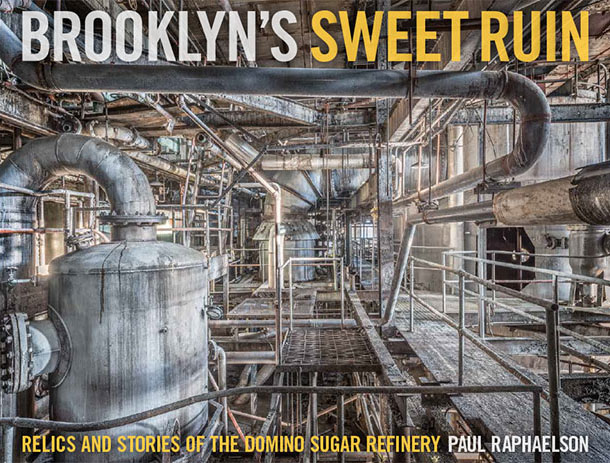 Domino’s Brooklyn Sugar refinery, once the largest in the world, shut down in 2004 after a long struggle. Most Brooklynites of my generation know it as an icon on the landscape, multiplied on t-shirts and skateboard graphics. Urban explorers sly enough to breach the gates have found a playground of sublime, post-industrial texture and nostalgia. But what was Domino? What stories were we missing?

In 2013, shortly before the site’s demolition, the owner generously let me in to explore. I had proposed an expansive—even messy—fusion of art, document, and industrial history. I wanted to show the ruin as its majestic self, and also as a lens through which to see the history of the place and its people.

In a sense, I found myself looking at a long-gone version of the country, through a recently-gone company and community, through a soon-to-be gone labyrinth of architecture and machines.

At the same time I found myself working in the abstract, seeing how much chaos I could allow into the frame, while still making a coherent picture. The visual density and confusion of the place invited this kind of formal experiment.

At first, I struggled to find words to accompany the photographs, beyond “look at this place!” Now, after months of editing and sequencing, researching, and writing for this book, I see lifetimes worth of ideas behind and between the pictures. I’ve gathered some of them into the essays in the back pages. I hope they help illuminate the photographs for you, as they did for me.

But first, I’d like to invite you in, quietly, just to look at this place…

Shot by Marc Campana of Octopus Creative Group. I wrote the script, edited the video, and wrote and performed the music. And suffered through being filmed.

The crowdfunding campaign earned over 5 times the campaign goals.

Our project video. “The making of … “